Sittin' in with Rocco Prestia of Tower of Power 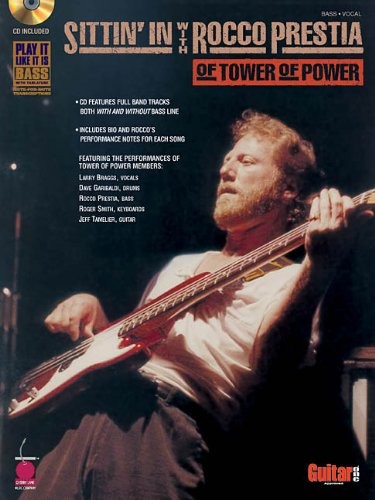 A funk institution and Tower of Power founding member, Rocco Prestia is one of the most important innovators of the electric bass. This Play-It-Like-It-Is Bass book/CD pack from Cherry Lane allows bassists to learn Rocco's authentic bass parts. The songbook includes full transcriptions with tab for eight songs, a bio on Rocco, and his performance notes for each tune. The special accompanying CD features performances by Rocco along with Tower of Power members Larry Braggs (vocals), Dave Garibaldi (drums), Roger Smith (keyboards) and Jeff Tamelier (guitar) on four TOP classics (Credit, Down to the Nightclub, There's Only So Much Oil in the Ground, What Is Hip) plus four new grooves created especially for this book (Don't Knock It, F-Funk, Free-Fallin' Funk, Hip-E-Jam)! Tracks on the CD are included both with and without the bass line so that players can “sit in” with Tower of Power!