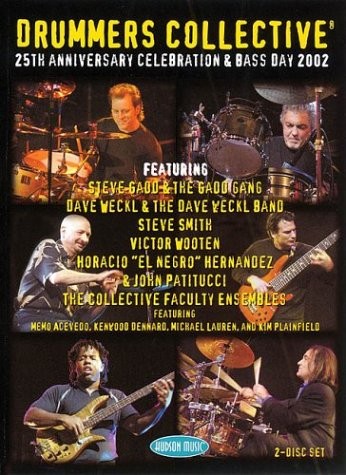 On Sunday, November 24, 2002 – The Drummers Collective celebrated its 25th Anniversary with an incredible evening of music in NYC. The Collective has been a haven for musicians from all over the world, since 1977.

Steve Gadd and the Gadd Gang closed out the day, with their first performance in ten years. Steve started off his set solo with a brilliant rendition of Bye Bye Blackbird and then did the rudimental solo, based on Crazy Army, that has become a trademark. The Gadd Gang, featuring Cornell Dupree on guitar, Eddie Gomez on bass, Ronnie Cuber on baritone sax, and Larry Goldings on Hammond B3, capped everything off with a set of soulful R&B.

Dave Weckl and The Dave Weckl Band, featuring Tom Kennedy on bass, Steve Weingart on keyboards, and Gary Meek on sax, performed a burning set that culminated with a drum solo that brought the house down, showing all of the swing and explosiveness that has led to Dave being recognized as one of the top drummers of his generation.

Special DVD Features:
Disc Two, offers an array of special features, including, 5.1 Surround Sound mixes (one per The Dave Weckl Band, Horacio Hernandez and John Patitucci, Victor Wooten and Steve Smith, and The Gadd Gang), Steve and Victor’s rehearsal, Artist Interviews, Alternate Edits with FootCam, More about the Collective, The Gadd Gang Soundcheck, a Photo Gallery and more. Includes a bonus audio CD at no extra charge with the following tracks: