The History of the 1966 Slab-Bodied Precision Bass 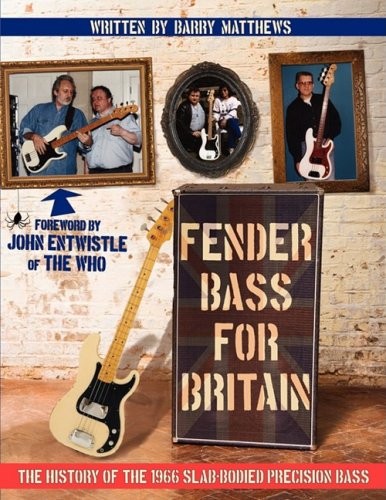 The book A Fender Bass for Britain tells the story of a rare bass guitar made in 1966, the heyday of classic rock bands. Only a few of this particular bass with it's unique combination of features were ever made, and they mostly came to Britain. There are many Pictures of John Entwistle and others, with the bass, never been seen or published before. This book tells of the man that made them, the men that played them and where some of them ended up. The book features interviews with the stars that used the bass, such as John Entwistle of The Who, Chip Hawkes of The Tremeloes and a number of others. The author, Barry Matthews, came across this bass in the Seventies and was intrigued. Then, in the Nineties, he started a systematic search to track them down and write the story behind them. He has travelled to the USA and to a number of places in England in the process of compiling this fascinating account.